He thought he wanted her to have an abortion, until... 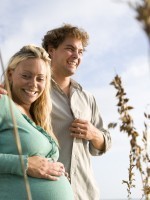 Kasey was undecided about her pregnancy, she felt nervous and afraid; she was the mother of a two-year old little boy and not sure she could handle another baby.

Kasey was also fearful that her relationship with her boyfriend would end. He was not thrilled at the idea of her being pregnant and told her she should have an abortion.

Kasey met a patient advocate with whom she was able to explore her thoughts and feelings. She began to realize that having an abortion was a bigger deal than she initially thought.

She owed it to herself to learn about all of her options.

She knew this decision would be with her for a long time.

Kasey was encouraged to talk to her boyfriend and invite him to come with her to her ultrasound appointment where he could speak with a male patient advocate. At the clinic, Kasey’s boyfriend was able to express his feelings and have his questions answered. He, likewise, was encouraged to talk to Kasey about his feelings and to go into the ultrasound with an open mind.

Together, they learned that the baby’s gestational age was seven weeks and three days. They were surprised to see how developed the baby was at such an early stage. They could see the baby had a strong heartbeat.

After meeting their baby for the first time via ultrasound, Kasey and her boyfriend knew abortion was no longer an option.

Kasey and her boyfriend were very thankful they found the Sacramento Life Center. Without the kindness of the staff and the free services provided, they may not have been able to make an informed decision about their pregnancy.

Two years of support through our many programs.

Emily and her husband, Peter, and their eight children, (three of whom have special needs), were referred to the Sacramento Life Center (SLC) during... END_OF_DOCUMENT_TOKEN_TO_BE_REPLACED

And We are Ready to Do More!

Having been founded in 1972, we are looking forward to great things in our 50th year. Our moto for this year is Ready to... END_OF_DOCUMENT_TOKEN_TO_BE_REPLACED

Unplanned pregnancies have not stopped during the COVID-19 pandemic and neither has abortion. While abortion clinics have not rested during this time, neither has the Sacramento Life Center! END_OF_DOCUMENT_TOKEN_TO_BE_REPLACED